Imagine waking up one morning with a deadly tiger snake in your bed. To make matters worse out of the window you notice an approaching bushfire.

Both are a threat to your life, but you are going to deal with the imminent danger of the snake first, and then tackle the more distant but still serious fire. It’s the same with the new coronavirus and climate change.

Since the rapid spread of the coronavirus beyond its origin in China and the social and economic havoc it’s wreaking across the globe, it may seem that climate change has dropped off the radar screen.

Certainly, commentators on the right of the political spectrum and those who are climate change deniers have sometimes resorted to something akin to glee in pointing out how the coronavirus has shifted climate change to the back burner of current concerns.

But this ignores the fact that at some point the world will contain the pandemic, and climate change will once again become a driving influence in the debate on the future of energy.

The coronavirus is also likely to change the market dynamics of the various types of energy, and mostly in favour of renewables such as wind, solar and hydropower.

The outbreak had already wrought radical change in two different ways. The first is that the oil and gas industry has been shaken to its core, while the second is that the cost of capital is at record lows, and there will be billions of dollars of stimulus spending looking for a home.

Take the oil and gas industry. While the media and analysts tend to focus on the immediate issue of massive oversupply amid a demand shock from much of the world’s economy going into some form of hibernation, the longer-term picture has also shifted.

The oil and gas industry has been crippled by the 53% slump in Brent crude futures since the high in January to around $34 a barrel on Tuesday, and the 66% plunge in the spot price of liquefied natural gas (LNG) in Asia <LNG-AS> from its pre-winter peak in October last year to last week’s record-low $2.80 per million British thermal units (mmBtu).

While it’s likely that both crude and LNG prices will recover in the coming months and years as demand growth resumes, it’s also likely that the trajectory will be lower.

Previous experience of price collapses shows it takes several years for a full recovery to eventuate, mainly as demand has to recover, or supply has to adjust lower in order to achieve a balanced market.

For crude and LNG what this means is that much of the investment that had been planned before the coronavirus struck will be delayed or even scrapped.

Up to $210 billion of planned oil and gas investments are now at risk from the coronavirus, consultants Wood Mackenzie said in an April 2 research note.

“$110 billion of investment will almost certainly be deferred, with another $100 billion at risk,” said Rob Morris, from Wood Mackenzie’s upstream research team. “New committed investment could be as low as $22 billion if only the most advantaged projects progress.”

This massive pullback in oil and gas spending will ultimately help drive a recovery in crude and LNG prices as supply tightens over the longer term, but it also opens up a rare opportunity for renewables to grab more market share. 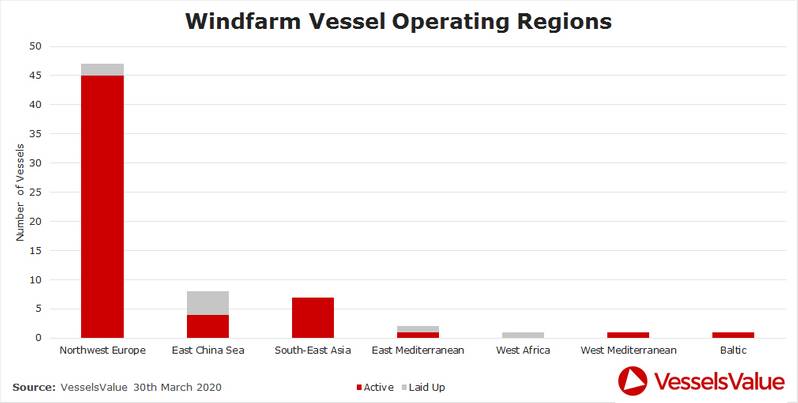 Source: VesselsValueAdvantage renewables
The biggest costs for utility scale wind, solar and battery storage projects are the upfront capital, given that once these projects are operating costs tend to be minimal.

With central banks flooding the system with cheap cash and governments likely to be keen to pursue stimulus projects once the coronavirus lockdowns are lifted, renewables should be able to capture an increasing share of this investment.

In Western countries, renewables are popular with the most of the populace, while fossil fuel plants such as coal and natural gas units have largely lost the public relations battle and are seen as part of the carbon emissions problem.

In developing nations such as India, Vietnam and others in Asia and Africa, renewables will likely be significantly cheaper and faster to build and connect to electricity grids than conventional fossil fuel power plants.

There is a counter-argument that cheap LNG will propel demand for new gas-fired power generation, but this will only be the case if the project developers and financiers believe that the current low LNG price will prevail for the 40 years life of a typical power plant.

However, they can be certain that the low cost of financing can be locked in for the life of a renewables project, thereby providing greater certainty.

Overall, the coronavirus will likely alter the energy landscape long after the initial crisis is past. With oil and gas weakened, the moment is there for renewables to seize.

The Perfect Storm That Could Drive Oil Even Higher

Aviation Turbine Fuel price cut by 1 per cent, LPG rate up by Rs 15.5

How Iran Used Google To Disrupt 5% Of Global Oil Production