Oil and gas activity in the United States is slowing even in some of the most prolific regions, as oil producers undergo some spending-belt tightening to stay a step ahead of volatile oil prices, a new Q3 fed survey showed on Wednesday, cited by Reuters.

While oil production is still increasing, holding firm at 12.4 million bpd for the last few weeks, oilfield services sector reported that they have seen declines in activities, a confirmation of the belief that US oil producers continue to find new ways to get more bang for their buck.

In 2019, the number of active oil rigs in the United States have fallen sharply, by 158, according to Baker Hughes, incurring losses in 10 of the last 11 weeks. At the same time, oil production in the United States has increased from an average of 11.7 million bpd at the beginning of the year to an average of 12.4 million bpd now, according to the EIA. 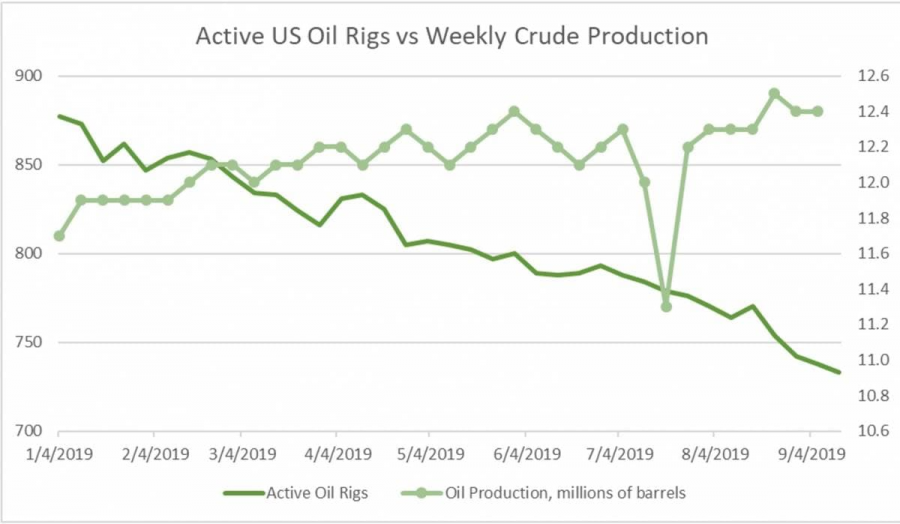 But while producers are enjoying lower costs with fewer wells, the outlook for oilfield services isn’t so rosy.

The overall outlook of the 55 oilfield services executives responding to the survey was negative, with more than 42% of participants showing a decrease in operating margins compared with the year prior.

But even exploration and production firms are proceeding with a cautious outlook, according to the survey. E&P firms who were surveyed mentioned that they were facing capital constraints and were worried about tariffs driving up costs.

The benchmark for WTI crude has risen from $45-ish per barrel at the beginning of the year to the high $50s now, but it is still almost $20 per barrel down from Q3 2018.

Overall, the Federal Reserve Bank of Dallas said that the energy sector growth index fell from 10.8 in the first quarter to -7.4 in the third quarter, indicating that business activity within the sector is contracting.